My name is Tamsin, I have just returned from 2 weeks volunteering with MARDi. In the UK I am a Senior Staff nurse and work in an Emergency Department in London, but wanted to further my experience working with refugees and in the humanitarian sector. 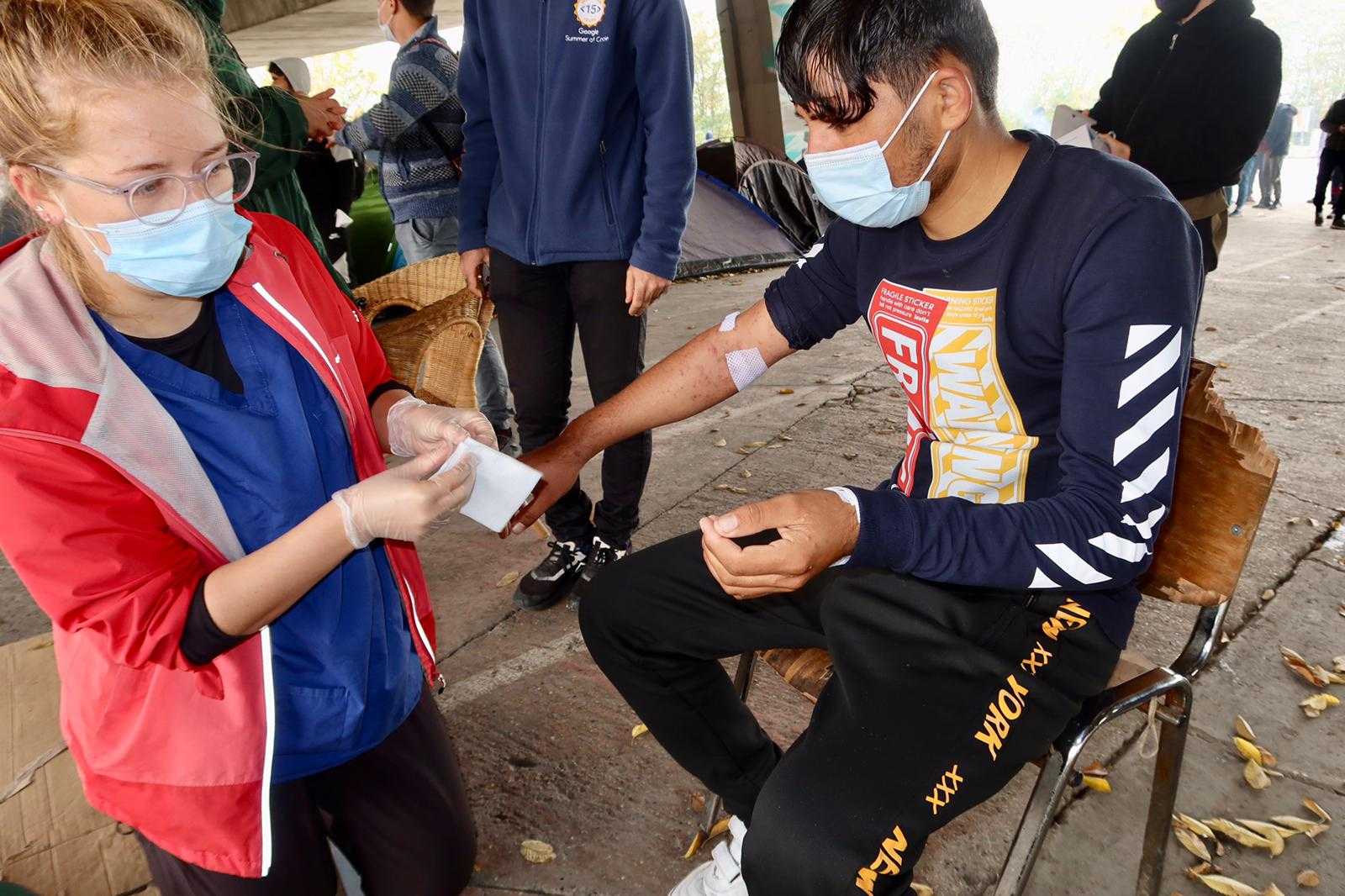 I arrived on a Monday with my Team Leader for the next 2 weeks Becci, another Emergency Department nurse who I work with in London. It was great to have a familiar face and someone to prevent my getting lost in a new city! While she had some reunions, I was introduced to some lovely people who work for Utopia 56 and share the warehouse with MARDi. Their organisation work tirelessly in the camp in the evenings, distributing tents, clothing and toiletries to refugees.

We soon got to work organising our part of the warehouse, cleaning and sorting through supplies into the new storage units.  At this time our third musketeer for the following weeks arrived, a Dutch, multi-lingual volunteer who would be our logistical hero throughout our time at the camp. We spent the afternoon getting to know each other, the supplies and the warehouse.

The next day we headed to the Paris Refugee Camps. I was a little apprehensive as I had not worked in a refugee camp before and didn’t know what to expect, logistically or emotionally. I was alongside a MARDi veteran and Team Leader so I was in very capable hands, and after finding our selected space on the concrete floor underneath a highway, we unpacked the clinic bags and got to work.

The non-medical volunteers were incredible in what was effectively crowd control, using their invaluable multi-lingual skills. The initial crowd consisted of excited people who were eager to see what was new, most of whom were just being nosey and soon left our queue. This created a much more manageable, less daunting, caseload for the morning!

It soon became apparent that the main complaints within the camp were scabies and cold and flu, or rather potential COVID-19 symptoms. Both of which it transpired, are terribly difficult to contain and treat within a camp. We gave the advice, including nearby COVID-testing centres, and symptom easing medications we could, but at the end of the day these people were going back to their closely packed, often shared tents where both infections would manifest, spread and continue. A fact I found difficult to swallow.

As the days went on we started to see more and more people with similar looking infected leg wounds. They formed little craters, which were dreadfully painful and spread rapidly all over their lower legs. At first we thought maybe they were infected scabies wounds as seen on many of their hands and arms but the men all started to tell us the same thing- that the wounds first presented while they were in the Bulgarian jungle. Whatever it was, we tried to manage them how we knew, to treat the symptoms and promote wound healing; a challenge in itself in a nutrition-poor, germ-filled setting. Medi-honey became our new best friend. We started asking people to come back every 2-3 days depending on how well they were able to keep the dressing clean and dry. Whatever they were, what we were doing was apparently working and we started to see some lovely improvements with their wounds. Our mobile make shift dressing clinic was seeing some results! It felt brilliant!

There were a couple of men whose cases were so bad they were unable to walk properly due to the pain, volunteers from our team accompanied them to free French clinics for antibiotics and further treatment. We later found out one young man was admitted for a week for antibiotics, the volunteer who accompanied him reported he was diagnosed with an extremely contagious skin infection. Figures.

Many of the men we saw regularly, whether it be for a little chit chat, a slice of TLC or to laugh at my apparently very entertaining Pashto progress! Whatever the reason I started to get to know some of the characters within the camp, a glimpse into what they used to get up to in their home countries before starting this journey.

There was one lovely young man who came to see us every day, always laughing and joking, he’d often be at the front trying to keep everyone in line so they received their fair share. He used to come more or less for a little chat until he developed a cellulitic insect bite that he wanted us to see. I popped a bit of antiseptic cream on and we planned to reassess it the following day. However, when he came to see us it soon transpired he had been struggling and he showed us some deliberate self-harm to his forearms.

We were quite taken aback as we had no idea he was mentally unwell. It became apparent that this strong, confident man, who was so well-liked within the camp, was having his own silent battle with his mental health. With the help of our trusted translating volunteers we were able to get him some mental health support with follow up appointments.

It transpired the Taliban had shot his brother and mother dead when he was 8. An unwelcome reality check into what these people were fleeing from.

We cleaned his wounds every day, sometimes he had new ones, sometimes it was redressing the old ones. Near the end of my time he came to me and I was fully expecting an arm full of fresh wounds but instead he just presented me with his nicely healing insect bite! I hope we had shown him that support is out there for him, and got him moving in the right direction.

I don’t know if because of him I was more aware but after his first presentation of self-harm, I noticed there were so many men with previous scars right up their arms. It really hit home how incredibly together these men appear on the outside, when they have so much hurt and so many wounds inside which are not going to be addressed until years down the line. Perhaps only when they have stability and their basic needs are taken care of, can they start to unravel their mental health needs. 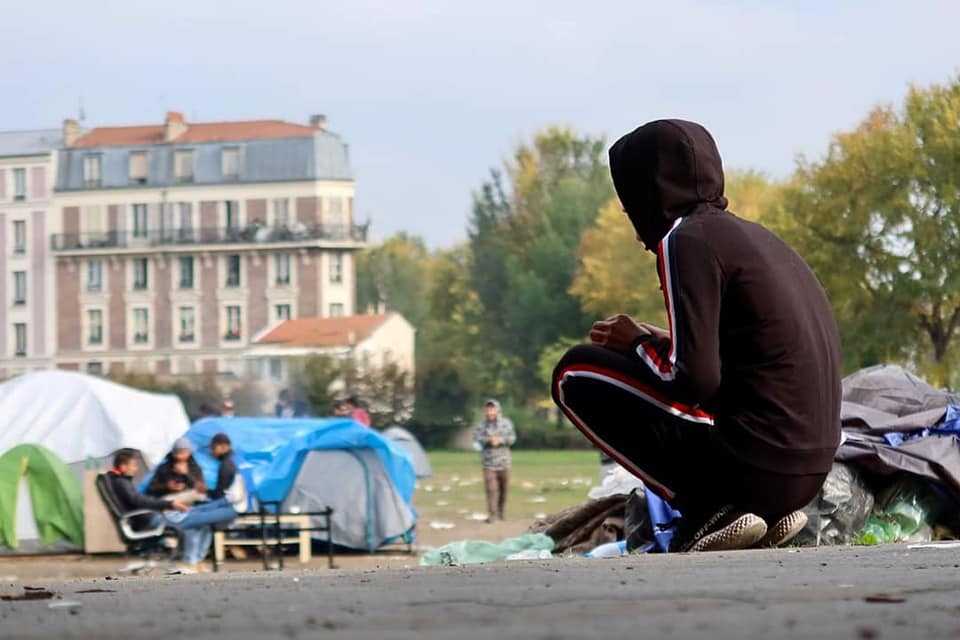 I soon loved the routine of the day.  New volunteers would arrive, we would start the morning with a little cup of tea, some introductions and set off on our half hour walk to the camp, bonding and chatting along the way. We would arrive at the camp, set up our cardboard clinic and get going for day. We saw approximately 100 patients a day, each documented as a tally beside their presenting complaint.  We would pack up when the queue dwindled, always ending with those last stragglers watching us pack up….only then would they present us with their complaint! The walk home was always full of chatter about the day, our future plans, and how outrageous the system seems to be.

Doing this work made me all too aware of the tiny intricacies the European governments have put into place to make this process as hard as possible for people seeking asylum.

Doing this work I met the most incredible, selfless, innovative, like-minded people who are dedicating their work and their lives to ensure refugees feel safe and are treated with respect and kindness. It is easy to get enveloped in all the negativity and feel like your efforts are futile when the governments seem to be working against the ideal. But then you find yourself surrounded with all these people with hearts bigger than their ribcages can manage, and it gives you a little hope for the future.